Making LIMBS for the Poor

Roger Gonzalez, Ph.D., founder and president of LIMBS International, demonstrates the LIMBS knee. It can be made in third-world countries with simple tools and locally obtainable materials for less than $100; often much less. Photo by Laura Trejo / UTEP News Service

"I was very sensitive to the plight of the poor and their inability to meet their medical needs," said Gonzalez, Ph.D., who joined The University of Texas at El Paso faculty in August as a professor of mechanical engineering. "If you were an amputee in Mexico, it was very difficult to get the resources to get a prosthesis to walk again.

"And I knew that Mexico was not the poorest part of the world – that there were actually much poorer parts," he said.

Today, Gonzalez is the founder and president of LIMBS International, a non-profit organization that strives to create highly functional, ultra-low-cost prosthetics for the "poorest of the poor."

According to the organization, there are more than 10 million amputees in the developing world in need of a prosthetic limb that they cannot afford or maintain once they have – which is where LIMBS comes in. 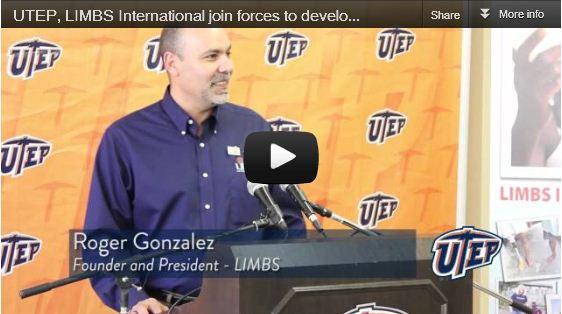 The effort started in 2003 when Gonzalez had an idea and challenged his students at LeTourneau University to develop a prosthetic knee that could be made in third-world countries with simple tools and locally obtainable materials.

The result was the LIMBS knee, the flagship product of the nonprofit. It is the only modular prosthetic knee in the world that meets all international standards and can be maintained and repaired locally in the developing world.

"The big thing was, and is, to design and develop prosthetic components that they can maintain and repair," Gonzalez said. "What happens a lot of times is people give prosthetics components away to these parts of the world and they wear out or break and can't be repaired or maintained locally. That's not a long-term or sustainable solution."

Since then, LIMBS has impacted countries throughout the world, including Bolivia, Kenya, Senegal, Bangladesh and Haiti.

However, the organization does more than simply create prosthetics.

After designing, creating and testing artificial limbs, teams of engineers, prosthetists, clinicians and students travel to third-world countries to educate and train local prosthetists how to manufacture, fit and repair the devices during week-long certification seminars.

This ultimately empowers local clinics, providing the knowledge and tools they need to break a pattern of dependency.

"When we leave, they can meet their own needs without us being there," Gonzalez said.

With the addition of Gonzalez to the UTEP faculty in August came a new UTEP-LIMBS connection as well.

The University's College of Engineering signed an official agreement with LIMBS that will allow collaboration between the two. The organization's research and development will operate on campus using the facilities within the new Biomedical Engineering and Bioinformatics Building. Meanwhile, the nonprofit's headquarters have been relocated from Longview, Texas to downtown El Paso.

"We really want to use UTEP as the base for us to expand significantly the amount of research and development that we're doing on our products," said Gonzalez, who hopes to develop a low-cost arm, prosthetic foot, and pediatric knee soon.

With the arrival of the organization on campus come new student opportunities, such as research, internships, fellowships and study abroad programs to give students a chance to see the real-world applications of their work.

Andrea Almonte, a senior in ,metallurgical and materials engineering, is one of the many students looking forward to working with LIMBS at UTEP.

"I really like what the program is trying to accomplish and the motivation behind their work," she said. "I think they'll benefit me in that I'm working for an organization that is working toward positively impacting the lives of others."

Almonte will aid the nonprofit in the research and testing of products.

Manny Pacillas, assistant dean for advancement in UTEP's College of Engineering, said the partnership with LIMBS will enhance the research and education of UTEP students.

"It will amplify our work and mission into areas of the world that we have an interest in," he said.

Indeed, Gonzalez hopes to significantly expand the reach of LIMBS, in particular to Central and South America.

Nonetheless, whether needy amputees are in Africa, Asia, or the local community, Gonzalez is committed to making a difference wherever they are.

"I think sometimes we underestimate how much is really necessary to develop cost-effective, functional things," he said. "The reason is that the poor can't afford to pay for it, so the poor get left behind; especially the poorest of the poor. My hope is that we make a dent in that."