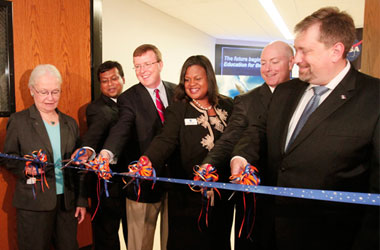 On Thursday, Sept. 6, NASA and The University of Texas at El Paso opened the Center for Space Exploration Technology Research (cSETR) at UTEP's College of Engineering.

"It's a great honor to represent NASA at today's opening of this world-class space exploration technology research center," said Peck, who is NASA's principal adviser and advocate for technology policy and programs. "Through this partnership, NASA will be able to tap into the incredible intellectual capital of UTEP for the development of new technologies that will enable our future missions, while also producing innovations that will spin off to benefit the regional and national economy."

Funded by multiple agencies, cSETR is a program for research and education in propulsion and energy engineering. It was established through a cooperative agreement through NASA's University Research Centers program, a project designed to achieve a broad-based, competitive aerospace capability among the nation's minority institutions.

Goals include fostering new aerospace science and technology concepts, and increasing the number of underrepresented and underserved students who obtain advanced degrees in NASA-related fields.

"UTEP's strategic goal of preparing a competitive workforce for the state and nation and, more importantly, educating and training a new generation of Hispanics to work in the aerospace industry, are all on display with today's grand opening of the Center for Space Exploration Technology Research," said UTEP President Diana Natalicio. "This new center is a national model for educating minority students in aerospace engineering, and our ongoing partnership and collaboration with NASA is a benefit to all of us at UTEP as well as to the Paso del Norte Region that we serve."

The new center facilities are part of a recent $22 million renovation in the College of Engineering, which include the Goddard Combustion and Propulsion Research Facility and the Challenger-Columbia Structures and Materials Research Laboratory.

The event is another milestone in the ongoing collaboration between NASA and UTEP.

"Our partnership with NASA creates opportunities for our faculty – to inspire another generation of technology explorers; and opportunities for our students – to reach for their own stars, and to drive the innovation engine of our nation," said Richard Schoephoerster, Ph.D., dean of UTEP's College of Engineering.

Peck capped the day by helping to launch the University's 2012-13 Centennial Lecture series.

He spoke before a packed auditorium of students, faculty, staff and community members at the Undergraduate Learning Center about how endeavors like cSETR are important in determining NASA's and the nation's future, and how NASA'S technological creations have impacted the nation.

He cited several examples of how technology developed by NASA is intertwined in daily life, including cell phone cameras, color-fast fabrics and bulletproof vests.

"The thing is it's not that we invest in NASA because of those impacts, we invest because we want to change the world," Peck said. "We want to learn about the cosmos. We want to send people to distant destinations that give us as humanity the experience of learning and living in space.

"But when we take on these hard problems, we ignite sparks that become new technologies that ultimately spin off and inform how our economy functions. We drive the innovation economy of the U.S. through a relatively small investment that we make in space technology."

According to Peck, in the last 10 years NASA inventions have saved more than 400,000 lives and the agency has created 66,000 new jobs.

Peck also encouraged students and faculty to participate in NASA's technology programs, which provide funding for research. Graduate students can apply for space technology research fellowships, while faculty can seek funding from the National Science Foundation through NASA.

As UTEP prepares to celebrate its 100th anniversary in 2014, the University is inviting speakers to campus as part of its Centennial Lecture Series who can provide perspective on a broad range of contemporary topics that impact society, culture and lives.