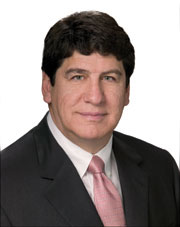 The University of Texas at El Paso and the UTEP Alumni Association are proud to announce the 2010 recipients of the Distinguished Alumni Award.

The measure of a university's strength can be found in the achievements of its alumni, who are a great source of pride for the University. The Distinguished Alumni Award is the highest honor that UTEP gives to its alumni.

They will be recognized during Homecoming Week (Oct. 4-9) activities, including the 2010 Distinguished Alumni Awards Dinner on Friday, Oct. 8, at the Don Haskins Center.

As CEO and partner in Trifecta Entertainment & Media, Hank Cohen leads a fully integrated multimedia development, production, distribution, sales and programming company. Most would view his previous position as CEO of MGM Television as a pinnacle, but Trifecta is revolutionizing the marketplace and promises to be his crowning achievement.

The El Paso native started his career in live theater before landing a job as a staff page at NBC. He progressed quickly to his first network executive job at ABC, which eventually propelled him to the top of MGM Television.

With the creative and savvy Cohen at the helm, MGM Television produced and distributed such hit series as Stargate SG-1 and its spin-offs, as well as Dead Like Me, Jeremiah, and the hit syndicated show She Spies.

Cohen is the 2001 College of Liberal Arts Gold Nugget. He received a bachelor's degree in mass communication from UTEP in 1978.

Mike Loya heads Vitol Inc., the muscular American arm of The Vitol Group, one of the world's largest energy trading companies. Vitol, with its billions of dollars in assets, beats the competition through the efficiency and diversity of product and partnerships that are hallmarks of its powerful global presence.

Competitiveness always has been a factor in Loya's success. His present project includes assembling a first-class electricity trading team.

Loya graduated from UTEP in 1977 with a bachelor's degree in mechanical engineering and went on to pursue a Master of Business Administration from Harvard Business School in 1979. He is the oldest of seven high-achieving siblings in a first-generation Mexican-American family.

Loya, the 2006 Gold Nugget from the College of Engineering, is involved in programs that give more students a chance at a good education. He serves on the board of trustees of Houston-based YES Prep Public Schools, an innovative multicampus charter school initiative that places 100 percent of its graduates—95 percent of whom are Hispanic or African-American—in four-year colleges through its rigorous curriculum.

Ceci Miles Mulvihill heads RMPersonnel, the successful integrated personnel and business services firm based in El Paso. Among her greatest assets is her passion for people, which serves her well as she leads a 3,000-plus employee, six-state operation focused on human resources.

The company she and her sisters started with their father's help is ranked 147th in Hispanic Business' list of the top 500 Hispanic-owned businesses in the nation.

Miles Mulvihill's dedication extends to numerous community and civic groups, including the El Paso Zoological Society; the Regional Economic and Development Corp. (REDCo); UTEP's Centennial Commission and Campaign Leadership Council, College of Education Advisory Board, and Development Board; and the Paso del Norte Group. Last fall, she was one of 35 role models honored by the Paso del Norte Entrepreneurship Oral History Project.

Miles Mulvihill received a bachelor's degree in education in 1969 and is the 2006 UTEP College of Education Gold Nugget.