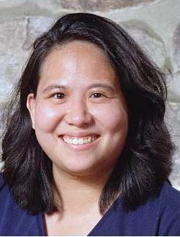 Eunice Santos, Ph.D., professor and chair of the Department of Computer Science at The University of Texas at El Paso, has been selected to receive the Institute of Electrical and Electronics Engineers (IEEE) Computer Society’s 2010 Technical Achievement Award for pioneering contributions to computational social network systems.

The award is given for outstanding and innovative contributions to the fields of computer and information science and engineering or computer technology.

The IEEE is the largest professional organization in engineering and computer science in the world with more than 375,000 members worldwide.

“Having recruited Dr. Santos from a highly competitive national search last year to lead our Department of Computer Science, we were very excited about the impact of her research on national security and defense in a highly globalized society,” said College of Engineering Dean Richard Schoephoerster. “We congratulate Dr. Santos for this recognition of her work. This award puts her in a very prestigious group of individuals who have had a major impact in the fields of computer technology and computer and information science and engineering over the past 25 years.”

Santos was among five recipients who received the award at the IEEE Computer Society Awards Dinner on June 9 in Denver.

Named chair of UTEP’s Department of Computer Science in 2009, Santos is a leading expert and researcher in the areas of large-scale distributed processing, computational modeling, complex adaptive systems, and human modeling with applications to the biological, physical and social sciences. She was appointed director of UTEP’s National Center for Border Security and Immigration and the Center for Defense Systems Research in December.

Santos has received numerous awards, including a National Science Foundation CAREER Award, the Spira Award for Excellence in Teaching and the Robinson Faculty Award.