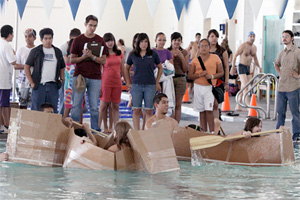 As the Excellence in Technology, Engineering and Science (ExciTES) Summer Institute came to a close July 29, middle school students had a chance to get their “feet wet” in canoe design, as each of them participated in a cardboard canoe race at The University of Texas at El Paso’s Swimming and Fitness Center.

The canoe event, one of 14 activities throughout the course of the summer camp, focused on the properties of buoyancy or “floating force.” Each student received a short lecture about the parameters that affect an object’s ability to float or sink. After a crash course in physics and engineering design, sixth and seventh grade students were given large cardboard boxes and tape and asked to create a canoe that that they would paddle across the pool in a competition against their campmates.

ExciTES, put on by students from the College of Engineering, is intended to build an interest in science, technology, engineering and mathematics (STEM) among middle and high school students in the El Paso and Juárez region.

“It was really fun. We put together a great canoe, so I’m happy with how we did,” said Evelyn Segura of Charles Middle School, who, along with teammate Alana Ublehor, took second place in the competition by completing five-and-a-half laps.

“After a while, my arms started getting tired from paddling so long,” Ublehor said. “It was still so much fun. I would like to do something like this when I grow up.”

“It was exciting to see our students so enthusiastic about applying what they learned with these hands-on projects,” he said.

Rodriguez stressed the importance of generating interest in STEM research fields at an early age.

“The summer institute is designed to create an interest in each discipline of STEM, related by students from the College of Engineering,” Rodriguez said. “Most students haven’t the slightest clue as to what an engineer actually does. Most would tell you, it’s a person who drives a train,’ which is true in some respect, though that is not what we really are.”

Junior civil engineering major and ExciTES co-organizer Melissa Sanchez was first drawn to engineering and science when she was in seventh grade. She remembers tinkering with electrical kits and competing in science fairs before becoming one of 2,300 students enrolled in the College of Engineering.

“We’ve had very positive results during the entire summer,” she said. “One of the most important things was actually teaching them the principles of science and math, so they could properly calculate things like weight and density before applying it to their project.”