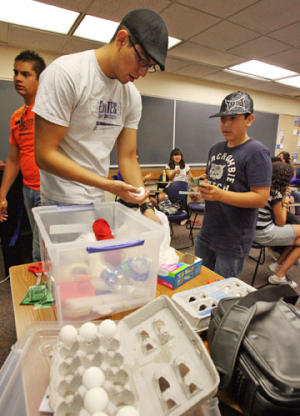 Danniel Rodriguez, coordinator and engineering student, hands out building materials to Carlos Carreon, 12, of H. E. Charles School as Carreon and his team began work on his teams Egg Drop, crate during the Engineering Camp held on the campus of the University of Texas at El Paso. (Ruben R Ramirez/El Paso Times)

Instead of spending the week relaxing at home before school resumes, about 60 middle- and high-school students are putting their brains to work.

The students are participants in the four-day Excellence in Technology, Engineering and Science camp at the University of Texas at El Paso. The camp ends at 2:30 p.m. today.

The camp "allows us to relate our knowledge with the students so they build interest in any of the fields they might want to pursue in college," said Michael Meraz, an engineering student at UTEP and organizer of the event.

Organizers said the camp is meant to promote problem-based, design-oriented projects among students.

The projects vary and include building a basic computer from scratch and constructing a hot-air balloon from tissue paper.

Meraz, though, said the most popular project is the construction of a canoe from cardboard. The students then race the vessels.

Students use only cardboard, tape and basic tools to build the canoes. The students will board them in teams of two today for the competition at the UTEP Swimming and Fitness Center pool.

The canoes are judged on design, stability and how many laps they complete.

Although the students were in the engineering program for just days, the knowledge they gained was apparent in their conversations.

"I see how buoyancy relates to design and how to make it work for the canoe," said Hanks High School freshman Robert Contreras.

Danniel Rodriguez, an event coordinator and engineering student, said he remembers going through the camp when he was a student in high school.

The camp "gave me insight to what engineering is all about," he said.

Rodriguez said he hopes one of the students in the camp this year will replace him as a coordinator in the future.

That person could be Victoria Duran, a freshman at Hanks High. "I learned it takes a lot of teamwork to make the projects," she said. "It's a lot of fun."