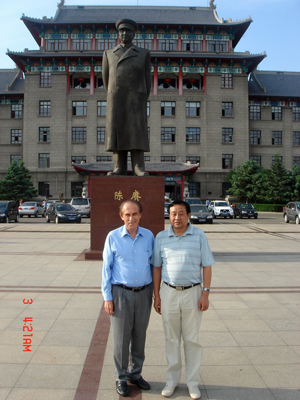 What started as a summer trip to China to accept an award for a lifetime of research turned into an invitation for The University of Texas at El Paso's Lawrence Murr to become a visiting professor at one of the top engineering schools in that country.

Murr, Ph.D., chairman of UTEP's Department of Metallurgical and Materials Engineering, accepted the request to be part of the Chinese Academy of Sciences (CAS) Senior International Scientists program. It involves collaborations with his Chinese counterparts at the Institute of Metal Research (IMR) and an additional visit to China next summer.

He said he hoped that the opportunities to work together would grow because they are good for UTEP's students and faculty.

"Those are excellent, outstanding people," he said upon his return earlier in July from his nine-week trip that included about 17 lectures and numerous events held in his honor.

Murr said he started working with his IMR colleagues in China and one of his doctoral students already has sent one of her projects to the institute's labs for testing.

Diana A. Ramirez, a Ph.D. candidate in metallurgical and materials engineering, said the Chinese collaborators were testing her samples of a copper foam product she manufactured with metal powder and an electron beam. The Chinese used unique testing techniques that helped move her research along. She planned to send four more samples.

"The kind of testing that our Chinese colleagues are doing is very specialized," Ramirez said. "It's difficult to find someone who will do that for us in the states. I can see how this partnership that Dr. Murr has organized will benefit the University as it continues its path toward national research university status."

As for his honor, Murr, who was accompanied by his wife of more than 50 years, Patricia, received the prestigious Lee Hsun (pronounced Shun) Research Award on May 23 in front of about 100 professors and doctoral students at the IMR in Shenyang, a large hub city in northeast China. The prize recognizes individuals for past accomplishments in the research field of materials science and technology.

"They treated me like a rock star," Murr said. "Everything was first class."

The topics of his lectures, which were given in English without translators, ranged from the highly technical to his way of writing a technical paper, which he suggested should be developed like a movie script, including the use of storyboards.

"Papers are the end product of significant research," said Murr, who also lectured in China in 2006. "If you don't do meaningful work, you can't write papers."

The lectures were well received by the hundreds of faculty members and students who attended, and IMR officials look forward to hosting him again next summer, said Zhe Zhou, institute director of foreign affairs, in a recent e-mail to Murr.

"We … would like to take this opportunity to thank you very much for your series (of) lectures and lots of discussion with our scientists and students" she wrote.