Research headed by Thomas Boland, Ph.D., director of biomedical engineering at The University of Texas at El Paso, is leading to the development of 3-D printed breast implants for cancer patients who have undergone lumpectomies.
Photo by J.R. Hernandez / UTEP News Service

Imagine this: you're lying on an operating table undergoing liposuction. Moments later, the fat that was removed from your body is placed inside a 3-D printer and printed into a new shape that your body needs – like a breast, if you've undergone a lumpectomy or mastectomy.

For years, Thomas Boland, Ph.D., director of biomedical engineering at The University of Texas at El Paso, has been developing technology that is capable of printing live human tissue.

Today, he is also the co-founder and chief science officer of TeVido Biodevices, a biomedical startup company that is ready and willing to take his patent-pending technology to patients, in particular, those who suffer from breast cancer.

Women who are diagnosed with breast cancer are often given one of two options: a lumpectomy, which only removes the tumor, or a mastectomy, the removal of the entire breast.

"About 150,000 women a year have lumpectomies due to breast cancer and they have no good option for reconstruction," Boland said. "Sometimes they even opt for the removal of the entire breast because then they can actually have a complete reconstruction – like Angelina Jolie did a few weeks ago."

After the surgery, those who are interested in reconstruction don't have very many options.

To fill a lumpectomy void, women may opt for fat grafting, a series of fat injections that may not be successful, or even breast reduction and reconstruction, where the healthy breast is reduced in size to match the reconstructed breast.

Women who opt for the removal of the entire breast may face a foreign body response to the silicone or saline-filled implants. Symptoms include pain, scarring and tissue contraction, where the breast begins to appear abnormal and is no longer symmetrical. Some saline-filled implants may even rupture. 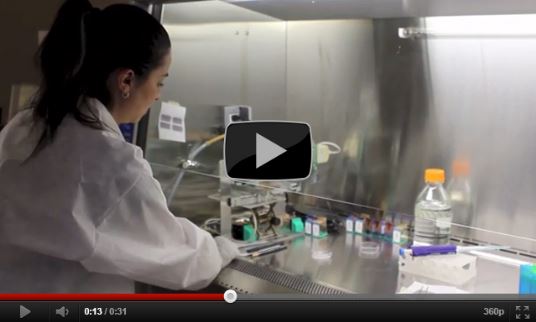 However, that could all be avoided with TeVido's 3-D printed implants.

"What we're going to do is take the patient's very own cells and use them so that there won't be a foreign body response," Boland said.

Still in the first phases of the study, TeVido is currently conducting studies on mice to verify tissue compatibility.

"What we're looking for is tissue rejection and anastomosis, where the body's microvessels [or blood vessels] connect with the skin graft," said Maria Yanez, Ph.D., a UTEP alumna and staff scientist at TeVido. "It's still a little early, but what I've found so far is that after the implant of the skin graft, fat cells start to grow."

In order to be successful, the cells need to survive, connect with the host and grow in the space where they're implanted.

Once the results are completely gathered, Laura Bosworth-Bucher, CEO of TeVido and UTEP alumna told MEDCITY News that "Next the work will be to expand the size [of the tissue] capability and prove that it works over larger sizes [for human use]."

Bosworth-Bucher, who is a former Fortune 50 executive and holds a degree in metallurgical and materials engineering, told El Paso Inc. that the products could be on the market in as little as seven years.

In the future, the team predicts that the technology will also be capable of helping patients with diabetes who suffer from chronic, non-healing wounds.

Boland said there's even a possibility of printing organs – like kidneys and hearts.

"There are a lot of opportunities for more research. For example, fat is important for supporting stem cells – there are a lot of them naturally in your fat and we could use liposuction to isolate them," he said. "And so it might be possible to regenerate organs that are failing. There is also some evidence that fat lowers scarring in people. So this could potentially help people who have been in accidents or are burned. We could improve their healing by implanting a small, thin layer of fat under their skin where they were scarred."