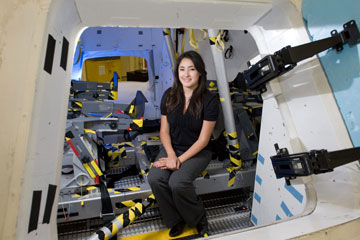 While some exceptions are made for sophomores, it is not often that a freshman student has the chance to participate in an internship, let alone with the National Aeronautics and Space Administration (NASA), three times before her junior year.

When Liliana Barreda, a sophomore mechanical engineering student at The University of Texas at El Paso, had an opportunity to spend the semester with NASA during the fall of 2008, she jumped right on it.

"When most people think of NASA, they think 'NASA, oh, that's way too big,'" Barreda said. "I decided to challenge myself and apply. I figured, what did I have to lose?"

The program drafted the young El Pasoan for a chance to work in Huntsville, Alabama at the Marshall Space Flight Center (SFC), under NASA's Undergraduate Student Research Program (USRP).

With only three engineering classes under her belt, the young UTEP student was hesitant when asked to redesign an airlock for the Microgravity Science Glovebox (MSG). But daunting as it sounds, this kind of work comes naturally to young Barreda.

"There was a series of training I went through, so as to make sure I knew how to run the (software) programs properly, but it was nothing," she said. "It came easy to me."

The most challenging aspect of her first internship was not the arduous duties the administration would give her, but the fact that in Huntsville, she had virtually nobody with whom to celebrate her 19th birthday.

"My brother worked at Marshall (SFC), so I remember going to dinner with him and some of his friends," she recalled. "After that, I just went up to my dorm room and fell asleep."

Nothing stopped her from going back the following summer, in 2009, to work on the propulsion design and internal ballistics unit for the Ares I and V rockets, part of NASA's Constellation Program for manned space travel. This time, she interned under The Society for Hispanic Professional Engineers (SHPE), again in Huntsville.

Challenging as her second visit was, it was during her third tour this past spring at Johnson Space Center, participating with the Systems Architecture and Integration Office, that she would come as close to space flight as she had always dreamed.

"You think differently at each one of these (internships)," she said. "It's really not like class where I just read a book, study the material and pass an exam. This is more hands on."

Originally assigned to the Orion Crew Exploration Vehicle (CEV) for future planetary terrain exploration, she was quickly reassigned to a project that would turn out to be the culmination of her experience at NASA.

The Robonaut 2 (R2), a robotic unit designed by NASA in partnership with General Motors (GM), is being considered for space flight and exploration. Barreda and her partner were assigned to design a truss anchoring the torso of this legless humanoid.

While it is unclear as to when R2 will see space flight, Barreda is most proud of the work she has accomplished with the droid-like machine.

"It's just so cool to think that something you worked so hard on is actually going to be in space one day," she said. "It's very exciting."

Now back at UTEP, Barreda is occasionally asked questions that range from silly to bizarre, such as, "How do astronauts use the restroom?" or "Did we really land on the moon?"

"I think it's ridiculous, but to answer their questions, I just tell them, 'I'm not saying' and 'Yes!,'" she said.

While most students take what they have learned in school and carry it over to the real life applications of an internship, it seems as though Barreda has done the complete opposite.

"I have a new appreciation for school," she said. "It's not as though I think school is easier, but I approach the problems I learn in class the same way I would've approached them at NASA. There's far more responsibility in the real world, so I use what I have learned and apply it to my school work."

Besides missing out on her mother's food for her 19th birthday, Barreda said she wouldn't trade her experiences with anyone. In fact, she plans to attempt a fourth internship, just as she completes her junior year.

"I remember being a girl and loving Star Wars and science fiction movies. One day, my dad took me out and I saw a jet with the NASA logo and yelled, 'Dad, look! NASA!' It always used to seem so far away, but now that it's happened, I feel like I can do anything."