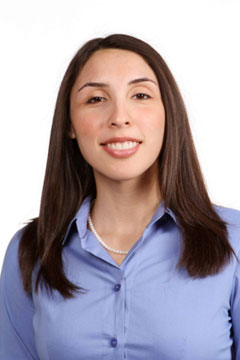 Sylvia Natividad, a recent Metallurgical and Materials Engineering graduate, was recently named one of UTEP's Top Ten Seniors, an honor given annually to UTEP's best and brightest students by the UTEP Alumni Association.

The first female in her family to receive a college degree, Sylvia earned many scholarships and actively participated in many campus organizations and activities as an undergraduate student. She was named an Albert S. Holbert Endowed Scholar and has received engineering awards from the American Society of Civil Engineering, the Texas Society for Professional Engineers and the National Action Council for Minorities in Engineering. Her campus activities include serving as a board member of Women in Science and Engineering (WISE), treasurer of the UTEP Rotary, fundraising co-chair for the Materials Advantage Society and president of the Alpha Sigma Mu materials engineering honor society. In the community, she has organized holiday events for La Posada, a domestic violence shelter; was a science fair judge at Cooley Elementary School; and was a fundraiser for the Humane Society of El Paso.

"My fondest memory of UTEP is my older brother's graduation day. I was so proud to see my brother, the first person in our family to graduate from college, receive his Bachelor of Science degree in Computer Science. This event inspired me to excel in my own career at this great University which provides everyone an equal opportunity to succeed."

This year's institute will be held in the new UTeach Lab located in the Undergraduate Learning Center. The lab was established with a $50,000 award from the Board of Regents of The University of Texas System. The UTEP UTeach Engineering Miners project is funded by the National Science Foundation through a Math Science Partnership (MSP) award to the Cockrell School of Engineering at UT Austin and the UT of Texas at Dallas.

The program is a natural outgrowth of UTEP reach-out programs. The first series of ESITs was pioneered at UT Austin, UT Dallas and UTEP last summer.

The original UTeach Institute was established at UT Austin in 2006 in response to national concerns about the quality of K-12 education in the areas of science, technology, engineering, and mathematics—collectively known as the STEM fields—and a growing interest in an innovative teacher preparation program at The University of Texas at Austin. Since 1997, the program has been so successful at significantly increasing the number of certified STEM teacher graduates, that it has received widespread acclaim, spurring inquiries from around the world.

UTEP's College of Engineering, Instructional Support Services (ISS), Gaining Early Awareness and Readiness for Undergraduate Programs (GEAR UP), and the College of Education are cooperating on the project. The goal is for UTEP to demonstrate leadership in engineering education and to increase the number of highly qualified (STEM) teachers in our region.

"Our Miners institute is a way of connecting our UTEP engineering education process directly with those teachers who prepare our students, and as such, is a key endeavor and one that is fun for us to be part of," said Mike Pitcher, Director of Instructional Support Services and member of UTEP's ESIT leadership team. Other collaborators include Debra Little, Clinical Professor of Engineering Education, Theresa Cortez from the Leadership & Foundations Department in the College of Education, and Juliette Caire, UTEP GEAR UP Director."