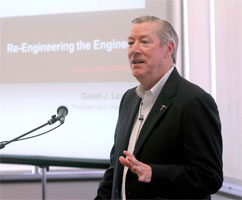 The leader of Halliburton, one of the world's largest providers of products and services to the energy sector, recently shared some ideas about how he believes today's student engineers can become tomorrow's industry leaders.

Lesar was the latest speaker in the "Engineering: Leadership for the Conceptual Age" lecture series organized by the College of Engineering.

Known as a "tell-it-like-it-is" executive, he drew chuckles from the crowd with his self-assessment that he was "often wrong, but never uncertain."

While complimentary of the smart, hard-working, self-driven, problem-solving engineers produced at universities across the country, including UTEP, he lamented the lack of certain skills that often limit their chances of joining boards of directors or senior management teams.

Lesar, who used a few PowerPoint slides for emphasis, said Halliburton, an international company with 70,000 employees including 12,500 engineers, does not have any engineers on its management team.

"As the need for basic engineering skills has decreased through technology advancements and automation, you look out there and the need for interpersonal skills, creative skills and verbal skills has become much more important," he said.

He suggested ways to incorporate those skills into current curriculum and other skills that will take more time and cooperation among UTEP's other colleges to develop.

Among his ideas are to reduce the engineering degree core curriculum hours to provide students with an opportunity to take less structured courses in such subjects such as psychology, animation and graphic design. He would make writing and business courses required. Of the core curriculum, he suggested that more grade emphasis be given to evaluation, visualization, communication and transformation of data into usable information.

Lesar recommended these changes because he sees that the people who get ahead in today's world are the ones who can interpret the data and make it verbally and visually understandable to clients who do not speak "engineer-ese," he said.

After the presentation, Lesar was joined for a question-and-answer session by Lawrence Pope, Halliburton executive vice president in charge of administration and human resources, and Bob Malone, president and CEO of First National Bank of Sonora (Texas), Halliburton board member, former chairman and president of British Petroleum (BP) America, and a 2003 UTEP Distinguished Alumnus.

Pope mentioned that when hiring a young engineer, he was willing to give up some grade point average if he saw some innate leadership qualities on a resume such as being captain of a sports team, a philanthropic effort, or a fraternity or sorority because those experiences show that you have dealt with diverse populations.

Malone, who earned his bachelor's degree in metallurgical engineering from UTEP in 1974, brought the University to Halliburton's attention. He and his wife, Diane, donated $500,000, and the energy company gave $1 million to the University in January 2011 for the College of Engineering to start a Leadership Engineering Program. It will be a broad-based curriculum that includes design, innovation and management with an emphasis on business, communication, ethics and social science. It is slated to launch in fall 2012.

Richard Schoephoerster, Ph.D., dean of the College of Engineering, introduced Lesar and moderated the Q&A. He said Lesar's comments "were right on the money."

Hoong Yan See Tao, an electrical and systems engineering doctoral student, said that she has spent part of her time on campus developing her leadership skills among various groups such as the UTEP chapters of the Society of Women Engineers and the Institute of Electrical and Electronic Engineers.

See Tao, who earned her bachelor's degree in electrical engineering from UTEP in 2009 and her master's last year, said extracurricular activities are great ways to learn the key tools to communicate and work as a team.

She needed both of those skills recently as she led a six-member multidisciplinary team to earn nine awards, including two first-place finishes, for its work on the Mars Water Works System at the NASA Texas Space Grant consortium Design Challenge April 16 in Houston.

"It absolutely helped me," she said, adding that she videotaped Lesar's presentation so she could share it with her peers.