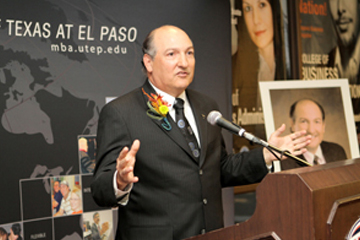 Since 2007, more than 80 UTEP students, including 28 from the College of Business Administration and 54 from the College of Engineering, have found careers at Lockheed Martin, the aerospace, defense, security and advanced technology company based in Bethesda, Md.

The successful placement rate can be traced to the recruiting efforts of UTEP alumnus David M. Rapisand. Rapisand has continuously demonstrated his support for his alma mater since he graduated in 1976 with a double major in marketing and accounting, and he maintains close ties to the university.

During the latest career fair sponsored by the University Career Center, he visited with College of Business Administration and College of Engineering students. Rapisand encouraged students to pursue internships and has found opportunities for 30 UTEP students, 20 of them from business administration and 10 from engineering.

"Whether it is lecturing in one of our ethics courses for business students, preparing students for the recruiting process, or serving as a role model for other UTEP graduates at Lockheed Martin, David is Team Lockheed-UTEP," said College of Business Administration Dean Robert Nachtmann, D.B.A. "He wears Lockheed's trademark on his shirt, works Lockheed's mission 24/7, and carries UTEP in his heart. As a Gold Nugget outstanding alumnus of the College of Business Administration, David gives back but he also gives forward, as is represented by each UTEP graduate who joins him in building the future of Lockheed Martin."

As the director of financial analysis and overhead control at Lockheed Martin, Rapisand is responsible for the managing, forecasting and controlling a budget of more than $ 2.4 billion – far from a stress-free job. He is the creator of the Rapisand Family Endowed Scholarship at UTEP, which helps students beat the high cost of college by providing them with funding for tuition, fees and other academic expenditures. The scholarship is a way for him to give back to the UTEP community, as he strongly believes in the responsibility of alumni to help educate those that come after them.

"Never forget your roots," he said. "Roots are more than just family."

Rapisand, along with fellow UTEP graduate Robert W. Gilmer, received UTEP's Gold Nugget Award from the College of Business Administration in 2010. Every year, the award is bestowed upon exceptional graduates from each of the University's colleges and schools who have given back to their communities and distinguished themselves in their professions and lives.

In addition to appearing at the Career Fair, Rapisand was a part of a visiting team from Lockheed Martin that offered students and nonstudents alike the experience of piloting T-50 and F-22 jet fighters through pilot training simulators at the Engineering Building in late February.

During the fall, Lockheed Martin participates in the College of Business Administration's networking mixer for employers and business students in a format similar to "speed dating." The event provides business students a more relaxed atmosphere to ask employers questions and learn about their organizations.

The dean's office encourages business students to broaden their knowledge base by traveling to different parts of the country through employer tours and leadership conferences organized by the Department of Undergraduate Programs. Lockheed Martin will host 10 students for a scheduled tour of their installations in Fort Worth, Texas on April 20.

UTEP graduate Marian Quevedo is grateful to have had the opportunity to intern with Lockheed Martin. She now works for the company full time in Fort Worth.

"David Rapisand has been a great mentor for all of UTEP alumni," Quevedo said. "It is good to see a graduate who cares about his fellow Miners; even though he is so busy, he still takes the time to help out."