Lecture Builds on Future Energy Use 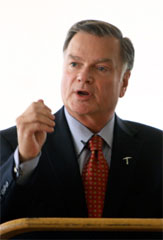 The future of sustainable engineering practices poses more than a design challenge. The growing world is on course for record energy consumption.

"I submit to all of you that the greatest crisis we confront in the 21st century is not an environmental crisis predicted by manmade computer models but a human crisis fully within our power to solve," said Boyce during his Feb. 10 visit to The University of Texas at El Paso as part of a College of Engineering lecture series.

The Peabody Plan centers on the need for developing countries to have access to energy. The correlation between increases in both global gross domestic product and the use of coal-fueled electricity is something Boyce calls "the economic miracle."

The plan also calls for ensuring half of the new electric generation comes from advanced coal plants – i.e. clean coal or coal conversion technology. Energy, said Boyce, is a human right and a rapidly rising need.

According to Boyce, current global coal demand is 7 billion tonnes per year, with the greatest demands originating from China and India, where population booms and developments are taking place at "breakneck speeds."

Keeping pace with the global industrialization and urbanization movement will mean a higher demand for energy.

Coal is abundant and will last another century or more, said Boyce. A forecast by the International Energy Agency shows a possible 65 percent increase in global coal use by 2035 – based on this, coal would become the largest energy source in the world by 2035, surpassing oil.

As China, India and other Asian countries rapidly develop, Boyce noted that migrating populations will fast create a new middle class with higher demands for cars, air conditioning and electronics.

"All require steel to make and power to run," Boyce said. "Coal is the only sustainable fuel with the scale to reach our energy access goal."

The UTEP College of Science lecture series, "Engineering Leadership for the Conceptual Age," began in September. The series is intended to bring speakers, such as Boyce, to the UTEP campus to address topics at the intersection of society and technology.

Boyce holds a Bachelor of Science degree in mining engineering from the University of Arizona and an advanced management program degree from Harvard University's Graduate School of Business. His leadership positions include chairman of the National Mining Association and deputy chairman of the Coal Industry Advisory Board of the International Energy Agency.

"We understand now the need to create engineers to solve the world's problems," said Richard Schoephoerster, dean of the College of Engineering. "The role of engineers in industry and government agencies is evolving due to global competitiveness and the increasing importance of service in the value chain. We have invited leaders in industry and in academia to lead us in a discussion on how engineering education should change in response. We are honored to have Mr. Boyce's participation in that conversation."

The next lecture in the engineering series will feature Simon Lorne, vice chair and chief legal officer of Millennium Management. The lecture is set for noon on Feb. 17 in the El Paso Natural Gas Conference Center on the UTEP campus.

The Engineering Lecture Series is made possible by contributions from Bob and Diane Malone and the Halliburton Foundation.